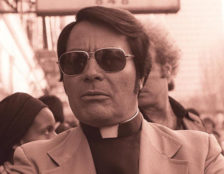 Judge in transgender case: Girls have no rights to ‘visual bodily privacy’

Much of $33 billion immigrants sent south was expedited by U.S. government program