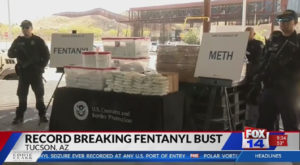 Schultz bomb: Democrats could not tolerate a Trump-like revolution in their own ranks

Shame on the Party that loves Power and hates America